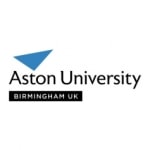 Aston University is a lively, welcoming and cosmopolitan campus-based university situated in the centre of Birmingham, the second-largest city in the UK. It was founded in 1895 and in 1966, received the Royal Charter to be a University from Queen Elizabeth II. The campus is home to five schools (Business, Engineering and Applied Sciences, Languages and Social Sciences Life and Health Sciences and the Medical school) which offer foundation, undergraduate, postgraduate taught and research programmes. Aston has more than 11,000 undergraduates and more than 2,000 postgraduate students from over 120 countries.

Aston consistently ranks high in various international league tables. In the 2014 Research Excellence Framework (REF), 78% of the research submitted was evaluated as ‘world-leading’ or ‘internationally-recognised’. Other highlights include being in the top 100 Best ‘Golden Age’ Universities in the World (Times Higher Education World University Rankings 2017), top 200 in the world (2018 QS Graduate Employability Rankings) and top 200 in Europe (Times Higher Education European University Rankings 2018).