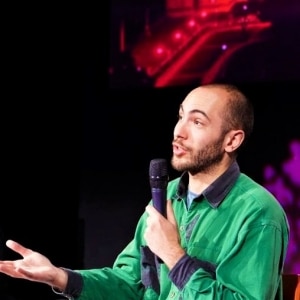 Tell us a bit about yourself – what was your PhD about and where did you study?

I’ve always thought that parasites are the most fascinating organisms, with their incredible range of evolved strategies to manipulate their hosts’ physiology and behaviour. After university I wanted to study immunoparasitology, because that was the host-parasite interaction I found the most interesting.

After having trouble finding an immunoparasitology project, I thought about studying one half of the relationship then applying that to the whole host-parasite interaction once I had my PhD. I decided to do my PhD in immunology because it’s harder than parasitology. I reasoned that it’d be easier to pick up parasitology as an immunologist than to pick up immunology as a parasitologist.

I did my PhD at the University of Nottingham, studying novel plant-based immunomodulatory compounds. I was right, immunology is HARD.

What do you do now? What did you decide to do next after gaining your PhD?

Now I’m a science communicator. During my PhD studies I started getting involved in sci comm through running events and interning at a science radio show. I’ve always loved talking about science, and doing it in a professional setting made me realise that I could do it for a living.

At the same time, I was growing to hate lab life. The constant repetition and frustration, the isolation and self-doubt were wearing me down. Don’t get me wrong, it was thrilling to be working at the cutting edge of human knowledge, but the day-to-day sucked. I started work a few days after submitting. Doing viva prep and corrections while working full-time was tough at times, but I really wanted to move on from my PhD as much as possible.

This combination of push (from the lab) and pull (from sci comm) meant my mind was firmly made up. As my hand-in date approached I started looking at sci comm jobs and I landed a position at the Science Museum as an Assistant Content Developer in the Contemporary Science team. This meant I’d not only be working at a major science communication institution, but I’d also be going back home to London, which I was very happy about!

Has having a PhD helped in developing your career? If yes, what has been the biggest impact? If no, why do you think that is?

Having a PhD has helped my career, although it did mean I started four years later than I would have!

The field of science communication is very competitive, because it’s so fun and interesting (certainly not because of the pay!), so it helps to have something that distinguishes me from the other candidates. Very few of my colleagues have a PhD, and this means that people respect my strong scientific grounding and first-hand understanding of the research process. This is particularly helpful when I’m talking to researchers, as there’s a certain level of easy rapport that emerges when it becomes clear they’re talking to a fellow researcher.

What’s one piece of advice that you’d offer prospective students considering a PhD?

Take ownership of your project as soon as possible.

By this I mean don’t just sit back and do what your supervisor tells you to do, or expect that they should drive the research. Initially you’ll be learning the ropes and there’ll be a steep learning curve, but it’s worth really making the work your own and taking it in directions YOU want to explore.

I didn’t do this, and it meant that I found it pretty hard at times to motivate myself because I wasn’t working for myself. I could’ve integrated some immunoparasitology into my project (and so made it more fun, everything’s more fun with parasites) but my lack of engagement meant that when my mental health wasn’t at its best it became really hard to care.

And what one thing would you suggest that new PhD graduates should do next?
Look around and have a think about what direction you want to go in. You don’t have to stay on the academic conveyor belt. It works for some people, but leaving the primary research environment is not failure. It’s independence!
Lastly, what’s your favourite memory from your time as a PhD student?
Handing in my thesis. My friend and I finished at the same time, we bound our theses and handed them in then sat on the lawn beside our lab and got day-drunk. Feeling the heavy burden we’d been carrying around fall away is a memory that still warms my heart to this day.
Thanks Khalil! How can our readers find out more about you and get in touch?

My Twitter handle is @KinkoTheMonkey, where I mainly post about science, music, martial arts and lefty politics. Come join in if that’s your thing!

My DMs are open if anyone wants any advice or to offer me work! I talk, write, curate, present and produce sci comm and I’m always up for an interesting project!