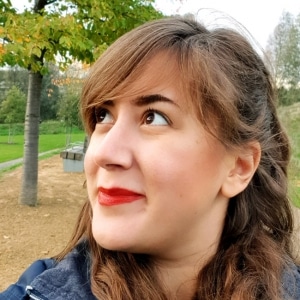 Tell us a bit about yourself – what stage of your PhD are you in and what’s your project about?
I’m in my fourth and final year, getting ready to write up my thesis and hopefully soon move on to the next stage in my career. As to what I work on, I’ve been exploring the application of evolutionary algorithms as generally intelligent game players (rolling horizon evolutionary algorithms), looking at different modifications to the algorithm or combinations with other methods which would increase its performance across a large number of games. I’ve also worked on better understanding the decision making process of these methods, their in-game behaviour and more in-depth analysis on the effect of particular modifications. With the purpose of improving the quality of AI players in games, making use of the innate high adaptability of evolutionary algorithms to new and unforseen circumstances. And a longer-term goal on top of that of creating interesting present game-players which interact with humans in more meaningful ways and become part of the gamers community. I’ve been involved or led many other projects during my PhD as well, such as automatic game design, learning game engine simulation models, optimisation, predicting game results from the player’s experience, and more recently learning to play games from audio cues.

What does a typical day or week look like for you?
I wouldn’t say any two days or weeks are the same, but what I’d say is my most typical day would start with breakfast and a slightly tardy arrival in the office. If I have any experiments running, I’d check on those (and probably fix bugs that popped up, and rerun), and then I’d reply to any emails marked as important. I’m usually pretty good at keeping my inbox clean and organized, probably because I always have it open throughout the day and quickly sort any new emails as either ‘not important’ (and deleted or marked as read) or ‘to be replied to’ (and moved unread into one of my many categories), with any urgent ones answered immediately. Then I’d take care of any admin duties, filling in forms, claiming trip expenses, planning new trips etc. Followed by either coding, if there’s something I’m working on, or writing (papers or thesis these days). There’d be a lunch break around 1pm (or earlier if someone in the office is very hungry), which is usually in a small group of other PhD students and occasionally staff in our research group. In the afternoon I’d go back to coding/writing, or teaching duties (preparing lectures, labs or coursework), or other projects I might have going on at the same time. I have a very short attention span, so I’d probably switch between several of these activities in the day (or just end up procrastinating and working on something unimportant, playing games, or watching random things), together with checking email and twitter for any interesting news in the community. This term I’m teaching half a module, so some weeks would have more teaching activities and lectures scheduled. I have meetings with my supervisor every two weeks, or more often if needed, and occasionally research meetings with others in the group as well. On Wednesdays we have a lunch-time research group meeting, where someone would be talking about their latest research or we’d discuss any other group-relevant topics. This term I’ve also joined a running group in the university, which take over my lunch breaks two days a week. And we’d generally have a games night on Wednesday or Thursday after work in the office – either playing board games, video games or D&D; or after work drinks, especially if there’s something to celebrate in the group. Occasionally work continues in the weekend, particularly if there are any conference deadlines approaching.
What’s one thing that you’ve enjoyed the most during your PhD?
Travelling! I’ve been very lucky to get several studies done during my PhD and get enough funding to attend many conferences, and this has definitely been the most rewarding part of my experience. I’m not very fond of social situations, and conferences are generally just that, a networking opportunity as well as finding out the latest research going on in the field. And it’s been nerve-wracking at first! But I’ve met so many amazing people, and many authors of papers I’d read and thought very highly of – now most conferences are a friendly gathering of the community that I’m a part of, and it’s great to hear what cool things the others have been up to since we last met. This, of course, besides the great locations conferences happen to take place in: so far I’ve visited The Netherlands, Spain, New York, Canada and Hawaii, just to name a few. There were many other great things during the PhD, but this is definitely my top one.
What’s been the most challenging part of it?
One thing people often like about PhDs is the freedom to make up your own schedule – you get to do what you want, when you want to do it. And that’s great, but I think this is the part I’ve found most challenging: giving myself structure and motivation to actually do the work at some point. For those who know me and my google scholar page, it often seems like that can’t be true, since I have done a lot of work. But it’s not been easy at all, especially with having that behind me and the pressure of keeping it up, among the chaos that life can throw at you from time to time. It often seems like every compliment I get on how hard-working I am is more like a nudge to do even more, and I’m great at procrastinating when I have too much work to do. So it can all turn into a vicious cycle that’s hard to escape, somewhere between “I should be working more” and “I should not put so much pressure on myself and relax more”.
Where do you see yourself 5 years after completing your PhD?

My current plan is to apply for a lecturership, which is going to be a difficult process if I don’t take the traditional route of a postdoc first after the PhD. But I feel like this is the right thing to do for me, and I’m fairly good at pursuing my goals. So, if that works, I assume that in 5 years I’ll still be teaching and doing research, maybe with my own PhD students then! Unless a great job pops up in the industry and they convince me to go for that instead, although I do enjoy the teaching and I’d prefer to pursue this passion.

What’s one piece of advice that you’d offer students that are thinking of doing a PhD?
Don’t be afraid to ask for what you want. I wouldn’t have gotten half the opportunities I did if I hadn’t asked for something at some point. The teaching I’m doing now, for example, that’s not a typical thing advertised to PhD students, but I wanted the experience, asked for it, and I got it. Ask to be involved in projects you’re interested in, and say yes if invitations pop up later on, even if it’s not core to your PhD: some of the best experiences I’ve had were actually working on topics completely unrelated to my thesis. Though, of course, don’t forget to actually work on your main topic as well…
What makes your university a good place to study?

Queen Mary University of London is currently 3rd in the world in the field of games research (http://www.kmjn.org/game-rankings/). Our research group has started only 2 years ago, but it has already attracted many leaders in the field and has grown very quickly in that short period. At the time of writing, this is *the* place to be if you’re planning to study anything related to games. The focus of the group is mainly split between AI for playing games and computational creativity, although there are several other topics covered – it’s always worth getting in touch if you’re interested in anything we do, or checking out our website (https://gameai.eecs.qmul.ac.uk). We’re also one of the universities involved in the Intelligent Games and Games Intelligence (IGGI – http://iggi.org.uk/) CDT, which aims to bring games research into the games industry and promotes interesting collaborations. The research group is also quite socially active and promotes a community (rather than lonesome PhD experiences), with regular games nights, lunches, hackathons, meetings, drinks, seminars or other activities being organised. And we are based in London, so there are many opportunities available all around!

What do you enjoy doing in your free time?
I’ve touched on this in a previous question, but I’ve taken up ballet classes this term, as well as joined a running group. I also like to play games (although this partly feels like work and often thinking “how could I get an algorithm to solve this problem…”), read books, watch movies, hangout in a pub (I’ve once been told that the best research ideas come up over beers) and travel. And I spend too much time in the depths of YouTube (you know those, when you find penguins rolling over, or cute giraffes).
Want to know more about Raluca?
Check out her website and follow her on twitter using the links below: