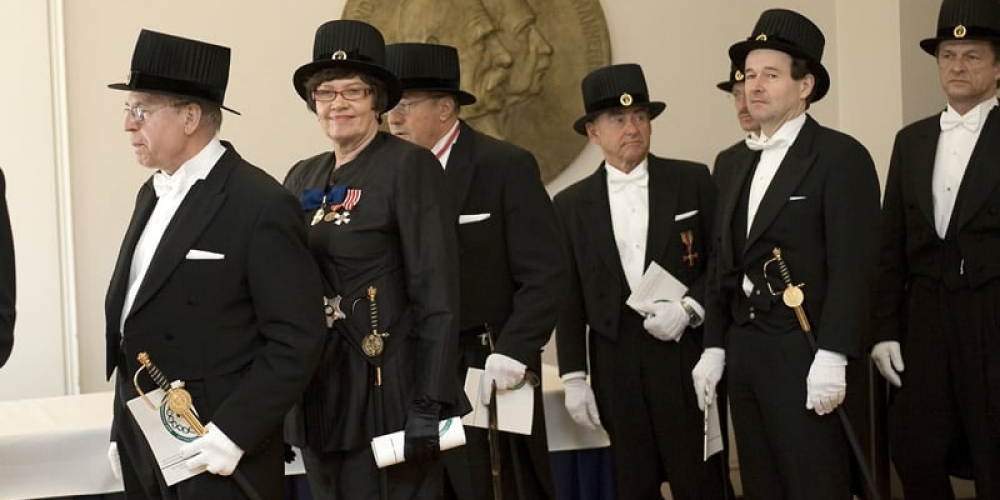 Quicktake:
In Finland, all new PhD holders are given a traditional PhD Sword and PhD Hat during a Conferment Ceremony. The sword and hat symbolise the freedom of research and the fight for what is good, right and true.

As my PhD graduation day neared in 2012, I was given the opportunity to travel to Toronto and I ended up missing the university ceremony, eventually receiving the doctoral degree certificate in the post a few weeks later. Had I been a PhD student in Finland, I would also have missed the Conferment ceremony and not received my PhD sword and hat. Let me explain…

Once the university is satisfied that the academic requirement for earning a PhD have been met, candidates are formally awarded their doctoral degree certificates which can be collected during graduation ceremonies similar to those in the UK or picked up from the university some-time later.

Whilst on paper you’ll now be a PhD holder, in Finland you’re not considered to be a proper Dr’ until you’ve been through the official ceremony of Conferment which involves receiving a doctoral hat and an actual doctoral sword! In fact, doctoral degree holders that haven’t gone through Conferment are ‘not allowed’ to wear their doctoral hats at any future ceremonies requiring them and must instead carry them in their hands!

The University of Oulu describes the Doctoral Hat as “a symbol of liberty…scholarship and freedom of research” and the Doctors Sword is “a symbol for the scientist’s fight for what he or she, in rigorous research, has found to be good, right and true”.

Conferment ceremonies take place every couple of years and as you can imagine are a big deal for new PhD holders/doctors. At the conferment ceremony, new doctors are presented with their PhD hat, PhD sword and certificate of conferment.

The PhD or Doctoral hat, which looks like a top hat, is normally black in colour, but this colour may also vary depending on the specific degree awarded; A Doctor of Medicine, for example, is associated with a green hat, whilst a Doctor of Fine Arts with a dark blue hat. It also usually displays the university emblem attached to a velvet ribbon.

On the evening before conferment day, a traditional sword-whetting’ ceremony occurs. At this, new PhD holders bring the sword that they’ll officially be presented with the next day and they sharpen this sword on a hand-turned grindstone that’s turned by the other people at the ceremony. This is usually followed by a short speech by the new doctor in which they describe the importance of the sword to them and how it symbolises the defence of knowledge and their responsibilities as a new doctoral degree holder. When they are worn in official ceremonies in the future, they are traditionally placed on the left side.

In the Ukraine and Poland, PhDs carry a Bulawa which is a baton or mace.

In addition to Finland’s PhD Sword and Hat customs, Finnish university PhD defences (i.e. the viva) are steeped in tradition when it comes to the academic dress code. Most commonly, male doctoral candidates wear a tailcoat and black waistcoat with black socks and shoes, or a dark suit or military uniform. Female candidates usually wear a long-sleeved, high-necked short black dress or two-piece suit. Candidates are not permitted to wear hats or any prominent jewellery.

The Custos and Opponent (I’ll explain what these mean further on), assuming that they themselves hold doctoral degrees, traditionally carry their doctoral hats in their hands when they walk into and out of the auditorium. During the actual examination, they place their hats on the table in front of them.

At the post-examination karonkka (celebratory dinner), most men usually wear a tailcoat but this time with a white waistcoat instead of black, whilst women tend to wear evening dresses. In more modern times however, there has been a trend towards men starting to wear black/dark suits and women short, formal dresses.

As well as the tradition of clothing, swords and hats, the process of submitting and defending a PhD thesis is itself a rite of passage of students. Read on to learn more….

First off, in Finland when you have write up your thesis you can do so in two main ways. The first is the conventional way used in the UK and elsewhere of a continuous large document, more than 50,000 words in length. The second (and the most common) is to submit a shorter summary thesis combined with 3 to 4 published papers.

When it’s ready, the thesis is examined internally by a thesis panel made up of faculty within your institution. This process occurs during what is known as a Grand Seminar’, which hopefully concludes with your thesis being approved for review by external examiners.
The external examiners will critically assess your research and the contents of your thesis and make suggestions for any edits or revisions if deemed necessary. The primary outcome you’re after here is approval from the external examiners for your thesis to move to the next stage: The Public Defence.

The levels of formality and adherence to past traditions does now vary to some extent across Finnish universities but traditionally, the next step is for the University Faculty to select an Opponent or Opponents and the Custos. The Custos is the name used to describe the person that will be chairing the public defence and the Opponent(s) are the people that will be formally debating with the PhD student about the content of their thesis (i.e. the examiners’).

Once the Opponent(s) and Custos have been appointed, a date for the public defence is set. At the University of Helsinki, for example, public defences usually take place on Wednesdays or Fridays at midday or at 10am on Saturdays; the actual examination however starts at a quarter past the hour, at time referred to as the “academic quarter”.

On the day of the defence, which takes place in a large auditorium and is open to any member of the public to attend, the public examination officially starts after the PhD student enters the auditorium, followed by the Custos and Opponent(s) (the order here is important).

The doctoral candidate will first deliver a “lectio praecursoria” which is a 20-minute presentation that introduces the work of their research and the methodology used. This is followed by short introductory remarks about the research by the Opponent, after which the formal cross-examination begins.

The formal examination can last several hours, with the Opponent systematically working through the content of the thesis and the doctoral candidate defending their work as questions arise. After examination by the Opponent is complete, he or she will (hopefully!) declare to the Faculty that the thesis should be accepted (i.e. that the doctoral degree should be awarded).

After this, the ‘floor’ is opened up to the general public, with anyone from the audience welcome to ask questions, moderated by the Custos. This sessions concludes with the PhD candidate, Opponent and Custos leaving the auditorium in the same order that they came in.

Assuming that they pass the examination, the successful doctoral candidate will traditionally invite their Opponent and Custos to a formal evening dinner known as a karonkka. These dinners are in themselves quite an event, with expectations of ‘fine’ dining, prepared speeches and smart dress.

The traditions involved in Finland for gaining a PhD and the symbolism of new doctors being presented with a Doctoral Hat and Sword is something quite special and one that I hope lasts for a long time to come. Had I done my PhD research in Finland, I wouldn’t have missed my Conferment Ceremony for the world!

This post gives you the best questions to ask at a PhD interview, to help you work out if your potential supervisor and lab is a good fit for you. Alex is a PhD student at the University of Bradford researching ritual and funerary rites in later prehistoric Scotland: an analysis of faunal assemblages from the Covesea Caves.

Dr Young gained his PhD in Neuroscience from the University of Cambridge. He is now a a Senior Lecturer at the University of Portsmouth, Deputy Director for the Institute of Biological and Biomedical Sciences and more!

The Power of Body Language in PhD Interviews

You’ve impressed the supervisor with your PhD application, now it’s time to ace your interview with these powerful body language tips.