What Is Tenure Track? 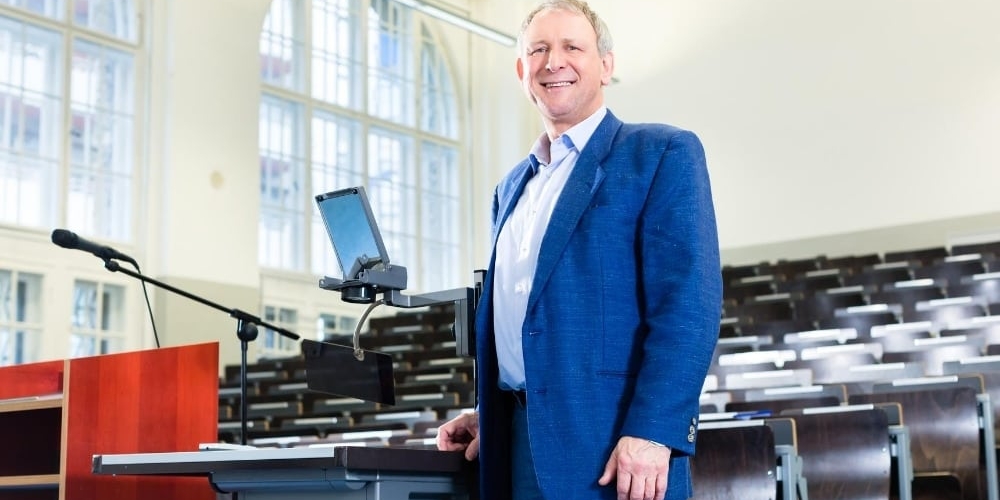 As a former Assistant Professor in the US, now living in the UK, I can’t begin to tell you how many questions I receive from students (and sometimes even young lecturers) about the tenure system.

Having answered every question there is to ask about tenure, I thought it would be a good idea to share my knowledge with a wider audience – partially because I think many of you will find this knowledge interesting, and partially to save myself from ever having to answer anything about tenure again!

What Does Tenure Mean?

Tenure is a term used to describe a permanent job position given to a university professor.

Tenure gives a professor a number of institutional and legal rights which provide them with ‘academic freedom’. These academic freedoms can differ between universities but mainly centre around allowing them to carry out any academic research, regardless of whether it may be in unpopular topics, surround controversial theories or involve challenging the work of others, without fear of losing their job.

Having tenure as an academic staff member, which is also called being in a tenure track appointment, typically means you can only be dismissed for grave misconduct. This is why most see tenure as a job for life.

Tenure in its current form today emerged from the 1940 Statement of Principles on Academic Freedom and Tenure. This statement of Principles was formed as a response to the growing occurrences in which university professors (and faculty members in general) were being let go for disagreeing with large, influential funding donors. Tenure was created to protect professors and guarantee them academic freedom so they could continue to teach and research as they best saw fit without fear of any repercussions.

While tenure is by far most commonly adopted in the US, not all American universities adopt it as part of their higher education policies.

For those that do, their staff members are expected to work in a period of probation for six to seven years before sitting a review to determine whether they should be awarded a tenure track professorship. Within these six to seven years, professors will be expected to develop a portfolio of published research papers, have acquired funding grants and have demonstrated administrative and teaching excellence.

After their probationary period, the professor will undergo an intense external review process; similar to how a UK university lecturer is assessed when being considered for promotion to an associate professor. The head of a department will recommend a tenure review to the faculty dean, who will then appoint a committee to undertake the review. The committee will gather information from the candidate, such as their CV, publication record and teaching portfolio, and from senior professors, such as a letter of review or short evaluation report. A decision is then made based on this information, and if the candidate is successful, they will be granted a tenured position within the faculty. However, if the application process is unsuccessful, the faculty member’s contract won’t be renewed and they’ll need to look for employment elsewhere. Although a tenure decision can be disputed, in reality, this very rarely happens.

In addition to offering tenure track appointment positions, most US universities also offer teaching and research positions which don’t have the potential for tenure. These positions, which can be anything from a lecturer to a research professor, typically have higher workloads, less pay, and less academic freedom. Consequently, nearly all faculty members will try to gain tenured status, which with only a few positions available, is why gaining a tenure track position is said to be extremely competitive. To add to this stress, the much sought after academic position of ‘full professor’ can only be achieved by tenured professors.

The tenure track system used to form part of the higher education policies in the UK, however, it was removed in the late ’80s. Nowadays, UK universities adopt temporary and permanent contracts which come with their own responsibilities and level of academic freedom and job security. While it may not be explicitly stated, any academic staff member on a permanent contract, whether they’re a lecturer, professor or reader etc., will be regarded as in an open-ended position, giving them academic freedom to research and teach as they see fit.

Besides academic freedom, one of the main arguments for tenure is the job security it provides is necessary for attracting high-quality individuals into higher education. Because universities can’t compete with the private sector in terms of pay, they need to offer alternative benefits if they hope to have a chance of competing with private companies given they’ll all be recruiting from the same talent pool.

Interestingly, job security also works both ways in academic settings. As well as the professor being granted stability, the university will be given the stability in the form of an individual capable of securing grants, leading research and publishing papers within a highly specialised field. Finding replacements with the same knowledge, experience and specialisation is extremely difficult, and as a result, the grants and research projects the individual was securing typically leave with them.

Despite the benefits brought about by tenure, many people believe it is negative, with a proportion of these individuals entirely against the use of tenure in educational systems.

Do you need to have published papers to do a PhD? The simple answer is no but it could benefit your application if you can. Other Posts
What is the Thurstone Scale?
DiscoverPhDs 14 November, 2020

Kai is a PhD student at Imperial College London. His research centres around sample efficiency, transfer learning and interpretability for deep reinforcement learning.​

Adam’s about to start his fifth year of PhD research at the University of Massachusetts Amherst, where he’s earning a doctorate in anthropology as an affiliated researcher with the University of Iceland’s medical school.

What Is The Age Limit for A PhD?

The answer is simple: there is no age limit for doing a PhD; in fact, the oldest known person to have gained a PhD in the UK was 95 years old.